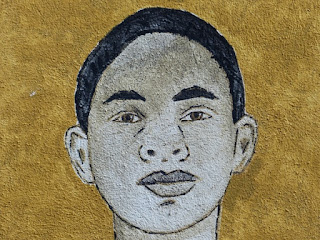 Saturday, we went shopping with Polo (the teen we’ve mentored for the last three years) and he was his usual exuberant (hyper) self. Although Polo has endured an unthinkable childhood, he is truly one of the most joyful, thankful individuals I know. Polo doesn’t smile, he lights up a room. He doesn’t say hello, he exudes love. Polo’s doesn’t stand in lines, he bounces.
A man next to us in line didn’t appreciate Polo’s bounce. Although Polo wasn’t interfering with the man he kept glaring at Polo and every dirty look made me want to smack the guy. When I got in the car fuming, I thought I should pray for the man. Not because I wanted to or because he deserved it, but because we’re supposed to pray for our enemies. So I prayed a half-hearted, reluctant prayer I didn’t mean.
I was mad at the man because he had no idea. No idea Polo was removed from his home due to egregious neglect and abuse when he was little. No idea that Polo’s sister eventually got adopted but not Polo. That horrible, insensitive man had no idea Polo has lived most of his life in group homes with no parents, family or anyone else advocating for him. I didn’t give it any conscious thought, but I knew my anger toward this dough head was legitimate and justified.
I have thought about this guy several times since Saturday. I asked my husband if he saw the man’s judgmental glances. I told a friend about him and how I reluctantly prayed for him. Subconsciously, I guess was pretty proud of myself for praying not realizing how insidious my pride, hypocrisy and judgment were disguising themselves in my heart and mind.
Romans 2:1 says, “You, therefore, have no excuse, you who pass judgment on someone else, for at whatever point you judge another, you are condemning yourself, because you who pass judgment do the same things.” Being the “good Christian” I am, I’ve memorized that verse. I’ve taught on it and I’ve even been convicted by it before (multiple times, in fact). Yet in judging someone I had no idea about, I was not being very “good” or Christ-like at all. Now who’s the dough head?
Why do I need to ask God to reveal my hidden sins everyday? It’s not because I need forgiveness, Christ already took care of that. It’s because when the Spirit reveals and weeds out the places I grieve Him, I can better honor and thank Jesus for what He did at the cross. I can love those Christ died for instead of subconsciously continuing to harbor anger and hatred for them because I have reasoned they deserve it, when I have no idea.
Although it’s embarrassing and humbling to realize our hidden, justified sins, when we do we can live and love more like Jesus and in doing so we can extend to others some of the love and grace that’s been given to us.